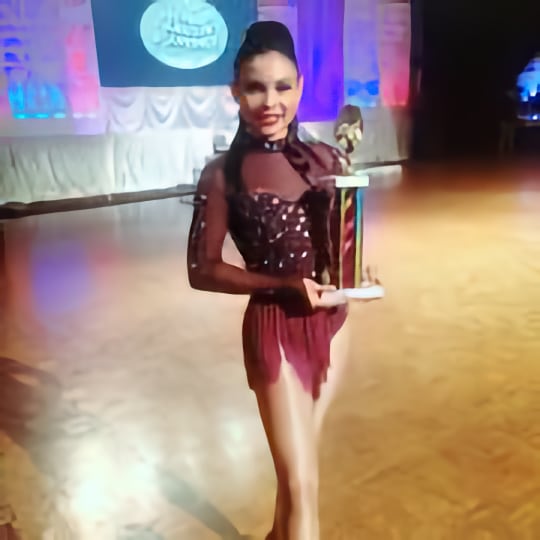 Michelle Cano, a student at Manhasset Middle School, has established herself as a major competitor at various Latin dance competitions.  With her dance teammates – Genelle, Stephanie, Melanie, Karen, Isabella, Gabriela, Sabina and Katherine – she recently won first place in the Salsa Junior Division at the World Salsa Summit 2017, one of the largest Latin dance competitions in the world.  It was held at the Miami Deauville Beach Resort Hotel on January 21st of this year.  Her team represented New York and the Mestizo Art Center, where she trains.

Michelle has been a student at Adventures in Learning, as well.  Diana Holden, Executive Director of Adventures, praised Michelle and her team.  “Everyone at Adventures is thrilled for Michelle.  There is no doubt that she is both an inspiring and magnificent representative of the Manhasset School District, Adventures, and, most especially, our community.  What an enormous accomplishment for Michelle and her team, and we send them our congratulations.  They certainly have earned a standing ovation! Bravo!”

Founded 48 years ago, Adventures in Learning is an after-school education and enrichment program, located in the Hagedorn Community Center at the Great Neck/Manhasset EOC building at 65 High Street, Manhasset, dedicated to improving the lives of children in need of after-school care and instruction.

Registration and login is required in order to bid

Register To Bid If you have already registered Login
We use cookies on our website to give you the most relevant experience by remembering your preferences and repeat visits. By clicking “Accept”, you consent to the use of ALL the cookies.
Cookie settingsACCEPT
Manage consent

This website uses cookies to improve your experience while you navigate through the website. Out of these, the cookies that are categorized as necessary are stored on your browser as they are essential for the working of basic functionalities of the website. We also use third-party cookies that help us analyze and understand how you use this website. These cookies will be stored in your browser only with your consent. You also have the option to opt-out of these cookies. But opting out of some of these cookies may affect your browsing experience.
Necessary Always Enabled
Necessary cookies are absolutely essential for the website to function properly. These cookies ensure basic functionalities and security features of the website, anonymously.
Functional
Functional cookies help to perform certain functionalities like sharing the content of the website on social media platforms, collect feedbacks, and other third-party features.
Performance
Performance cookies are used to understand and analyze the key performance indexes of the website which helps in delivering a better user experience for the visitors.
Analytics
Analytical cookies are used to understand how visitors interact with the website. These cookies help provide information on metrics the number of visitors, bounce rate, traffic source, etc.
Advertisement
Advertisement cookies are used to provide visitors with relevant ads and marketing campaigns. These cookies track visitors across websites and collect information to provide customized ads.
Others
Other uncategorized cookies are those that are being analyzed and have not been classified into a category as yet.
SAVE & ACCEPT